Wat Saket - The Temple of the Golden Mount Bangkok

Category : Travel News - By Brian Vu - At 8:40 PM/Sunday, July 16, 2017 - No comment - Location: Bangkok, Thailand
Being nationally known as the place of cremation of 60,000 victims of plague, the oldest temple of Bangkok, Wat Saket, the Golden Mount Temple has attracted a significant number of worshippers, followers, or even tourists strongly believing that all wishes will turn into reality. 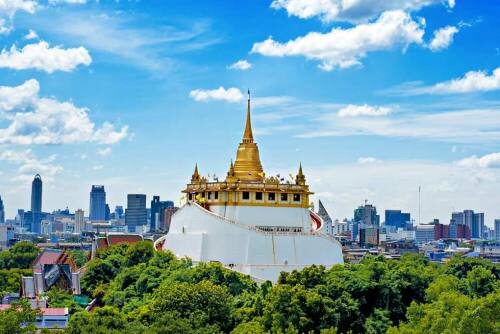 In addition to familiar temples such as Wat Arun, Wat Pho, and Wat Phra Kaew, Thai Land is also nationally and internationally famous for Wat Saket Buddhist Temple, also known as Golden Mount Temple. Located right in the heart of the capital, the temple is housed on a low hill. Standing from a distance, tourists definitely realize the temple by a glittering gilding stupa at a height of up to 58 meters. Moreover, Wat Saket is surrounded by lush trees, so it makes visitors comfortable and releases the hot weather of the tropical region at the same time.

The temple was originally built under of Ayuthaya Kingdom (1350-1767) and underwent several restoration and renovation under the reign of King Rama I (1782-1809). The temple is characterized by the relics of the Buddha, so it draws a large number of Buddhist worshipers and followers all year round. To reach the temple, visitors need to go through over 300 winding steps like a snake. However, the destination is quite accessible thanks to the large passage, moderately high and safe steps, and instructing and warning signs.

The path leading to the tower of Wat Saket Temple is charming enough to fascinate all visitors, especially nature lovers and photographers. Standing at the tower, you can greet the panorama of the shimmering and splendid Bangkok featuring the perfect combinations of the ancient and modern significances, skyscrapers, and glittering gilding stupas.

It is hard to find out the most sacred temple in Bangkok, so both local and foreign visitors still flock to Wat Sake Temple to pray for the good luck, good health, good business, etc. They strongly believe that the temple makes their “in - need wishes” come true partly because of the long history of the temple.
At the end of the 18th century, the capital of Thailand suffered from unprecedented epidemics that caused the death of thousands of people. The corpses were lined up in Wat Saket temple for cremation, then gradually piled up, making it a good meal for vultures. Later, the temple was chanted by monks to pray for the dead. This event makes Wat Saket temple calm, and tranquil that is quite different from other worshipping places. 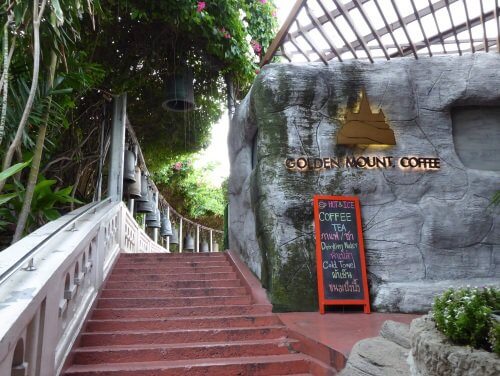 In November, the temple hosted a large festival following the burning incense to the Buddhist relics. During the festival, the peak of the tower is covered with a huge red cloth, accompanied by a magnificent candle-lit procession marking the beginning of a joyful festive week. Therefore, if you visit the temple in this time, you might grasp a rare opportunity to admire a large-scale festival throughout the year.

The festival attracts a great number of visitors, including worshippers, followers, and even tourists who gather at the yard of the temple from the festival’s beginning until the late night for a whole week. If you get there in the late afternoon, you might face to traffic stuck. Therefore, you should go to the temple as soon as possible.

Visiting the temple, visitors can light candles, burn incense, arrange the lotus into the vase, and pray. Because these services are available at any time, you might put cash into the donation box.

Tourists might follow the wooden stairs to reach the top of the tower and greet the panorama of the whole Bangkok at sunset. How amazing!